It all started in a little town west of Cleveland called Huron, OH where my friend Sarah was living. Since I’m the world’s best company I was asked to tag along as she moves across country to LA. There were plenty of laughs, sites to see, interesting road signs, and DINOSAURS!

We left Huron in the morning, bright and early and drove through the terrible snowy pot-holed ridden roads and brake-tappers of Indiana (see shitlist). Once we reached Missouri and St. Louis we finally stopped seeing so much snow and grass began to appear.

As we drove through the beautiful Ozarks we started seeing tons of signs for a place called Meramac Caverns. The signs piqued our interest and we decided it was a good place to stop and stretch our legs. Meramac Caverns’ claim to fame is that it is the largest cavern in Missouri and the famous hideout of Jesse James. There was absolutely nobody there accept for the workers and we were only able to see and walk into the entrance of the cavern since tours were a whopping $20 (not sure who would pay that!).

Night began to fall as we crossed from Missouri to the no tolerance sucky state of Oklahoma (also see shitlist). After missing the very confusing supposed-to-pull-over-for toll both (which we were scolded for when we exited the highway) Sarah was pulled over by an asshole cop for going 6 miles over. Did I mention this is a NO TOLERANCE state? It says so right on the signs. We continuously passed signs that said don’t drive into the smoke which made more since when we saw a random fire on the side of the highway. Although I’m not sure what you’re supposed to do if there is smoke…stop in the middle of the road? After 17 hours of driving we stayed the night at a hotel in Oklahoma City (which we were also hassled for).

After Oklahoma came the top part of Texas (aka nothing) and then the beautiful and long state of New Mexico with its mesa and mountain filled landscape and random third-world looking towns. We pulled off into a retro town in the middle of nowhere called Tucumcari that felt like it was from a movie. It was a total flashback of the 50s. If you aren’t aware yet Sarah and I LOVE dinosaurs! In Tucumcari there is a dinosaur museum which we were hoping had a dino outside we could take pictures with, but sadly there wasn’t. While traveling, after the umpteenth time of listening to Will I Am and Britney Bitch the station suddenly turned into strange Native American music which we chalked up to the spirits taking over the radio.

New Mexico turns into the other long state of Arizona (my home). Shortly after entering the state we finally got to see some awesome dinosaurs which made us super happy. While I was driving we had a dance off with some city workers which also made us super happy. Day then turned into night as we drove through Flagstaff and the rest of the state. After another long 17 hours we drove up through the tip of Nevada to Las Vegas where I had booked a steal-of-a-deal hotel room at Circus Circus for only $33.

We made sure to get some sleep and woke up to a cold, rainy, gloomy Vegas day. That didn’t stop us from exploring the Strip. Rain-soaked, we ate lunch at a tiny hard-to-find sushi place tucked underneath Bally’s that only had 8 tables. And it was delicious! After meeting up with Sarah’s friend Shane we sped walk back to our car to finish the last leg of the trip.

After only a measly 4.5 hours and more dinosaurs at Peggy Sue’s 50s Diner, we reached our final destination, LA!

States on the shitlist (besides Tennessee):
Indiana
Oklahoma

Songs that would not stop repeating:
Will I Am and Britney Bitch
Thrift Shop
Fun.-Carry On
Of Monsters and Men (something about a ship)

Songs we only heard once but couldn’t get enough of:
Jethro Tull-Bungle in the Jungle

Places with funny names:
Kum & Go (which is where I would work if I was a hooker, it makes sense)
Gay’s Hops & Schnapps 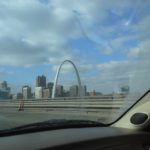 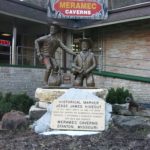 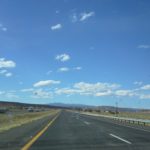 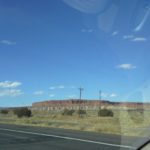 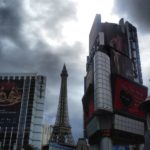